In evaluating the relative characteristics of various top lit open draft kilns we desired to test, in addition to a metal cone kiln (previous Posts 1-3) and an earth pit cone kiln (post 4), a pyramid kiln and a vertical sided kiln such as one made from a 200 L drum. A drum was not readily available to us in our village in Switzerland. However, we had at our disposal a rectangular box, which held promise to shed some light on how both a rectangular kiln and a vertical sided kiln would compare to a cone. The box had interior dimensions 139 cm long by 77 cm wide by 82 cm deep, therefore of volume 878 L, comparable with the cone kiln volume of 827 L.

We installed a rectangular mesh grate with 40 mm mesh mounted 25 cm off the floor on 6 bricks. (The grid was not necessary and could be dispensed with in another box experiment, depending on depth.)

Our operating procedure was similar to that which we used with the cone kiln. We layered some carpentry scrap timber and grape vine roots over the grate, then built a pyramid of smaller roots and carpentry scraps up to nearly the top of the box. Once burning well we piled in the vine roots to get them drying because they were wet from overnight rain, and some were quite large. The twist roots had large air spaces between them, so they readily dried. The packing density can be seen in the picture below taken at this stage. When they began to ash, we added layers until the box was full – probably a bulk of about 5 box loads of twisty roots.

While we expected the box to tend to develop similar convection loops in a similar way to the cone, we also expected them to be less stable. Smoke from paint on the outside of the box rose vertically with the hot air and drafted over the walls into the updraft above the box. However the entrainment of air from the inner wall of the box and the development of inward rolling convection was less pronounced and more chaotic than with the cone. Thus more smoke escaped the flames, exacerbated by blustery winds. More flame seemed to reside lower down in the box among all the spaces between the roots. To the extent similar spaces existed in the cone, they filled up more quickly since char from a level with larger diameter was funneled down into a smaller diameter thicker layer in the cone. Thus the box produced more smoke and more ash, clearly showing up the cone as the better geometry.

The final layer in the box was allowed to ash more to ensure the larger pieces were carbonized and to allow further volatiles from deeper layers to be expelled and burned in the top flames. 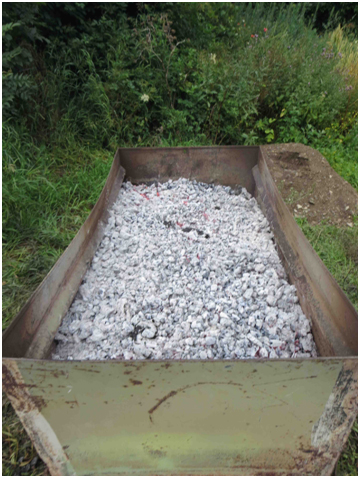 For initial quenching, sufficient water was sprayed on to cool the top layer. This allowed an examination of the convection of the hot steam issuing from the char. In the stiller evening air and with less chaos than hot flames, the steam displayed the expected convection loops. That is the steam spread horizontally from the center of the box towards the walls and the corners. It rose up the walls, entrained by air rising up the outside of the box to feed the updraft above the box. Some of the steam rolled back over to downdraft into the center of the box. This was apparent along both side, both ends and often the corners. The rolling cylinders of steam were half the size of the box, ie. one rolling from each side and meeting in the center. Other arrangements seemed occasionally to develop with additional rolls in the interior.

Quenching was continued and the box monitored as it cooled for 6 hours (see below).

Clearly more than the minimum water is needed because the water does not distribute itself equitably amongst all the char. I was interested to see if I could quench the char by adding only about 100 L of water (enough to fill the bottom of the 82 cm box to 10cm if no hot char were present to evaporate, adsorb and absorb it). I then covered the box with a sheet of metal to snuff air circulation, with the idea of steaming the char, and having a drier char next morning. Over 2 or 3 hours the sides of the box did not cool, and may have got hotter. To preserve char I continued to add water (perhaps 200 L more) and continued monitoring, with the lid on, till the box was on a cooling trajectory. It was still warm in the morning.

I have repeated this experiment with another kiln, with similar lack of clarity as to status of the char in the bulk of the kiln. If the char is generating additional heat after partial quenching, then it is oxidizing and partially converting to ash. I conclude that the easiest and safest way to ensure retaining all the precious biochar is to flood the char till it is all under or floating in water.