Following the exploration and teaching about cavity kilns like open pyramids, cones and cylinders in BC, Canada (Cavity Kilns in Canada – October 2014), I built similar kilns in California.

This is a photo blog on building 4ft (1.2m) pyramid kiln out of metal sheet, and a 1 cubic yard cylinder kiln out of a large propane tank on a rural property in Northern California.

There are various suggestions for what these open draft cavity kilns ought to be called as a category. As shown in previous blogs, the cavity can be a cone, pyramid, drum, cylinder or ring, pit or trench in the ground, or even partially closed. The distinguishing feature is the cavity, with open draft above, and the ability and necessity to continue to add biomass during the batch run (usually not a feature of a retort or TLUD). This works so well because the flame above the pyrolyzing biomass in the kiln consumes most of the oxygen convecting into the kiln so that at the carbonizing biomass below the flame there is little oxygen to gasify the char. The char is formed at a relatively high temperature in these open, oxic, kilns so most oxygen rich volatiles are distilled off. Char gasification is the process of oxidizing the residual solid C to gaseous CO, which can then combust, and the process can’t proceed much in an anoxic or oxygen starved environment. The char is conserved and prevented from turning to ash.

In this blog I am using the term Flame Shield Kiln to draw attention to this important operating feature of protecting the biochar with flame. Harnessing the flame in this way also encourages a clean burn because the smoke is drawn into and consumed in the copious flame.

The guide to operating the kiln is essentially flame management. Start a clean fire in the kiln, then feed it with enough material to keep a lively flame over the whole surface. Too slow a feed and the flame dies back, allowing the biochar to oxidize to ash, and also allowing smoke to escape when more biomass is added. Too fast a feed smothers the flame, places material outside the flame zone, and also promotes smoke to escape. 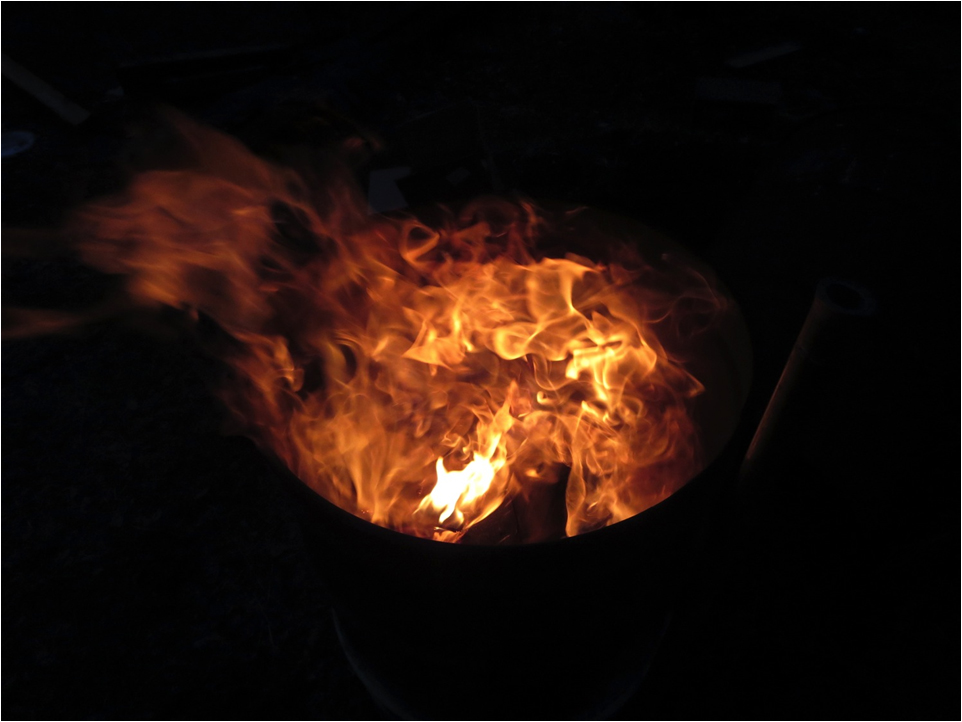 Cutting the sides and base 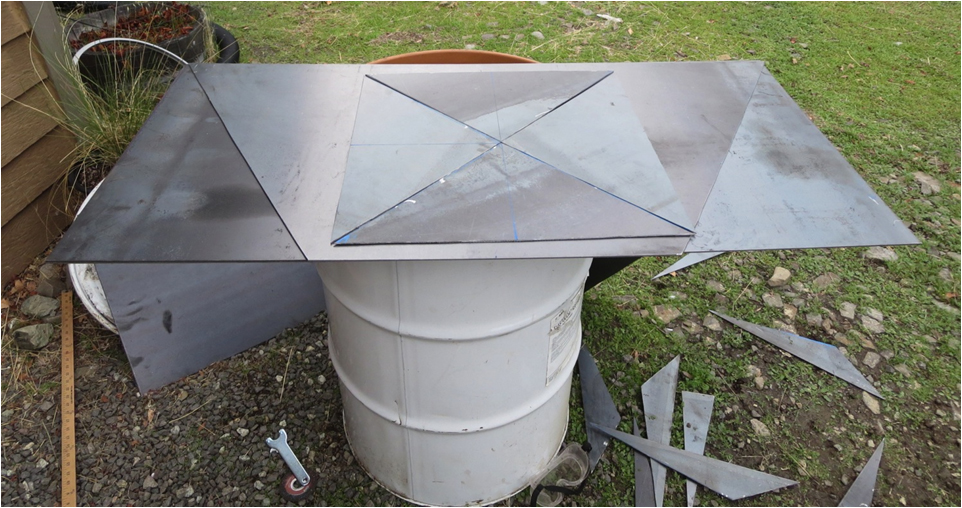 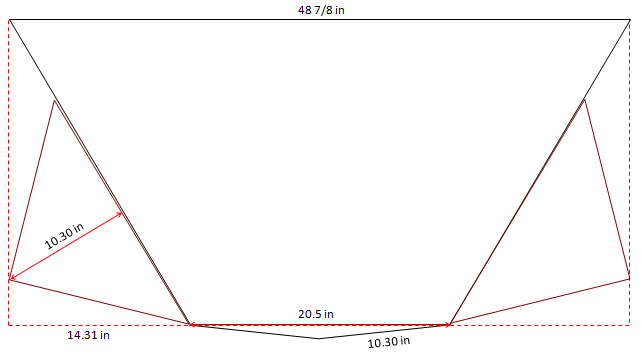 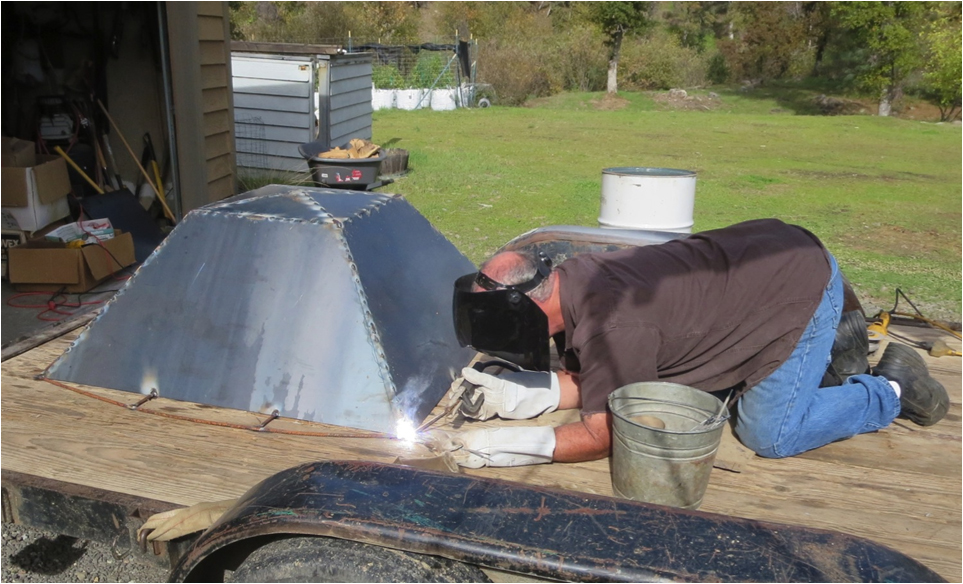 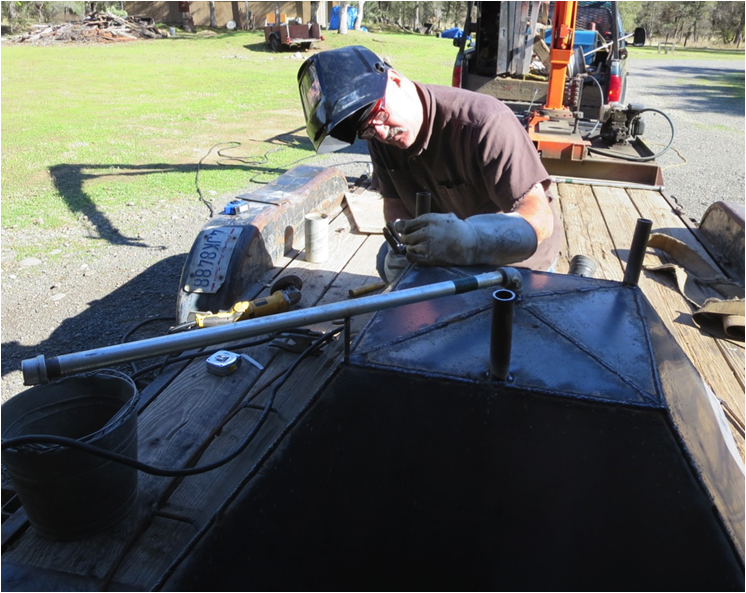 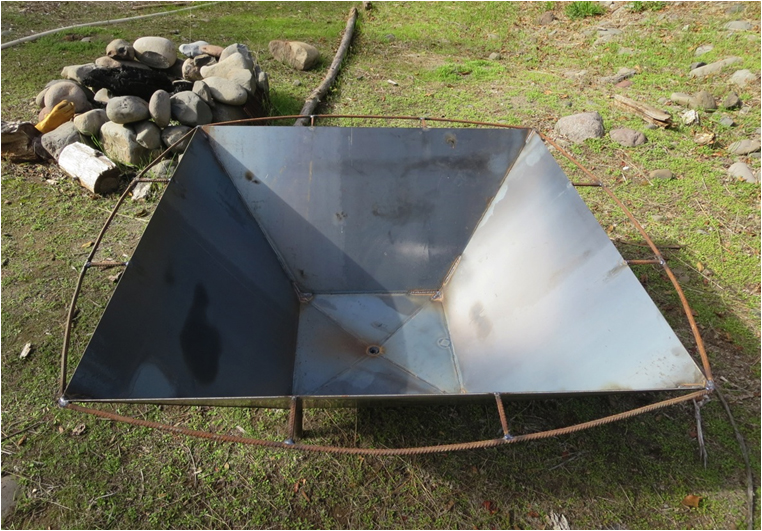 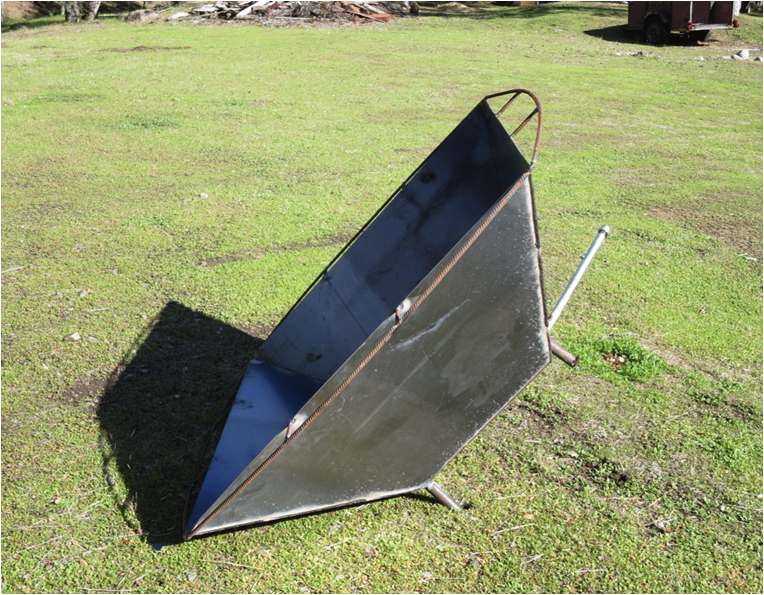 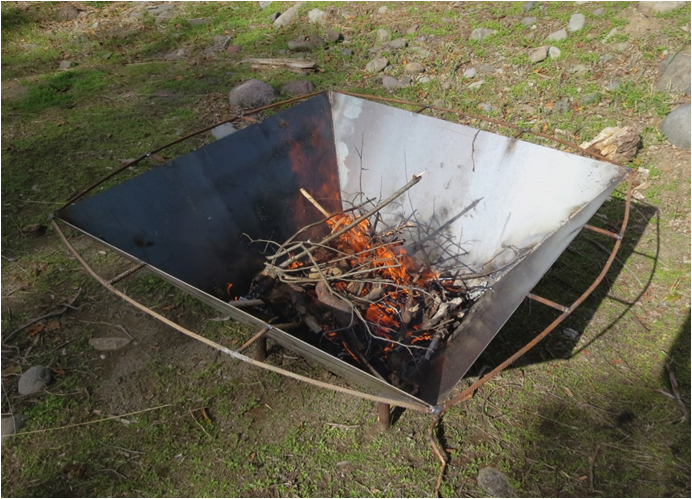 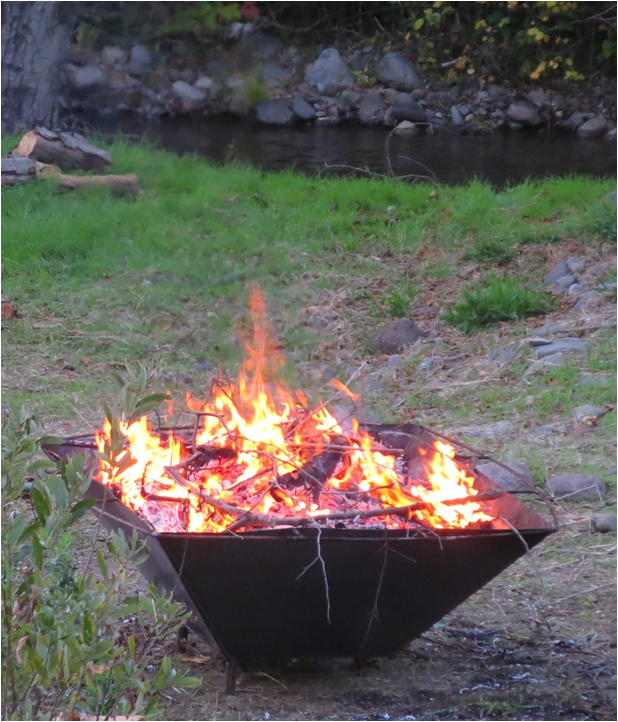 Clean up the property while making biochar 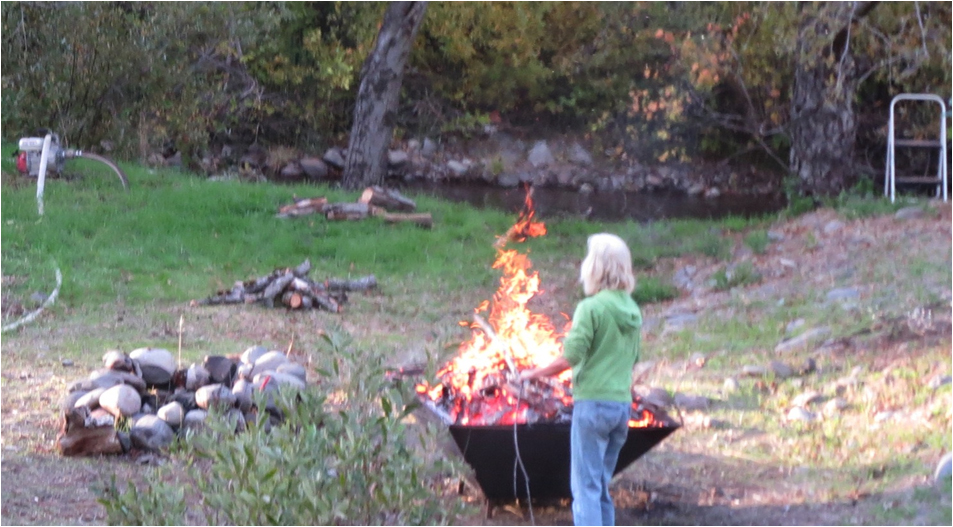 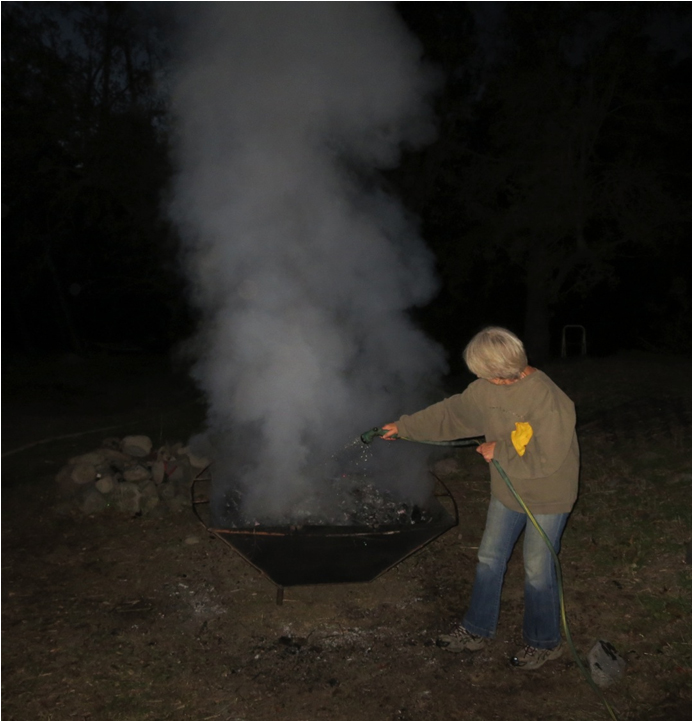 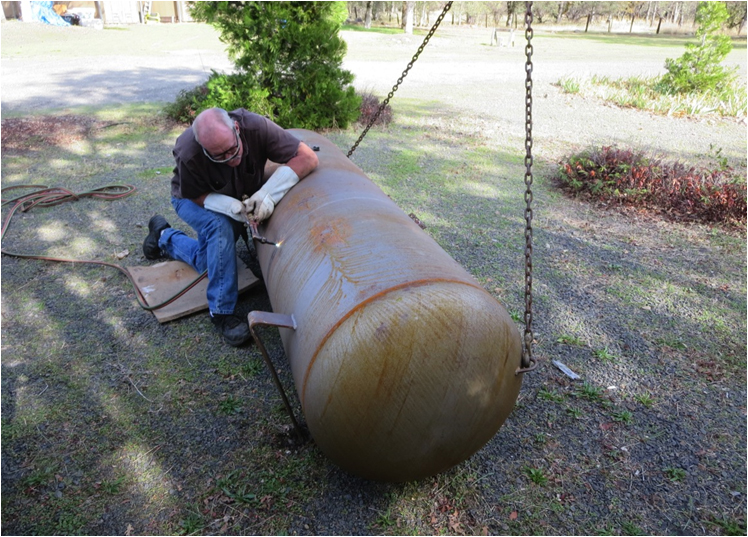 This propane tank was professionally emptied and sand blasted before purchase

(This is California after all. See my last blog for how we safely handled it in Canada)

Weld on legs and drain pipe. That’s it! 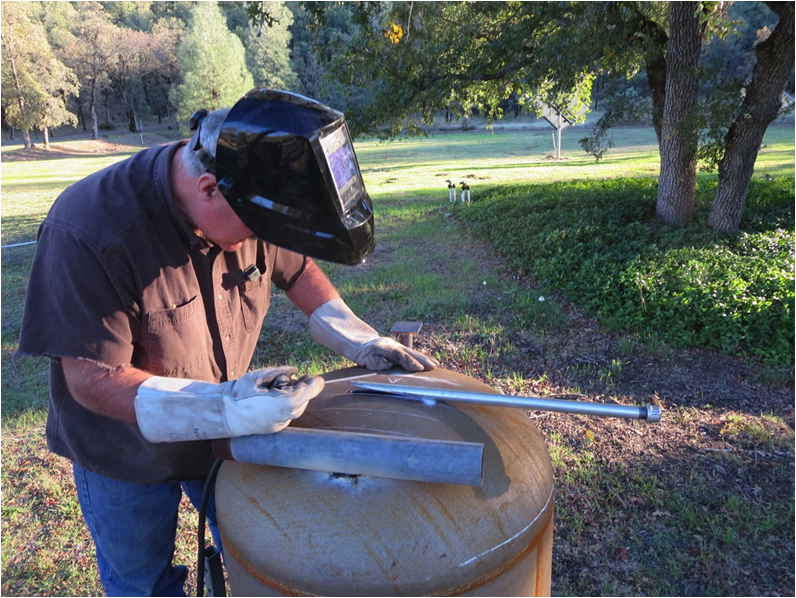 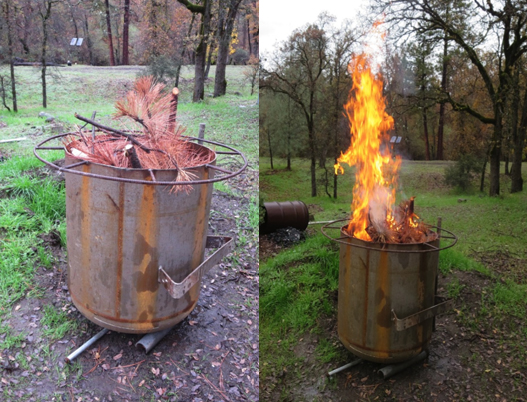 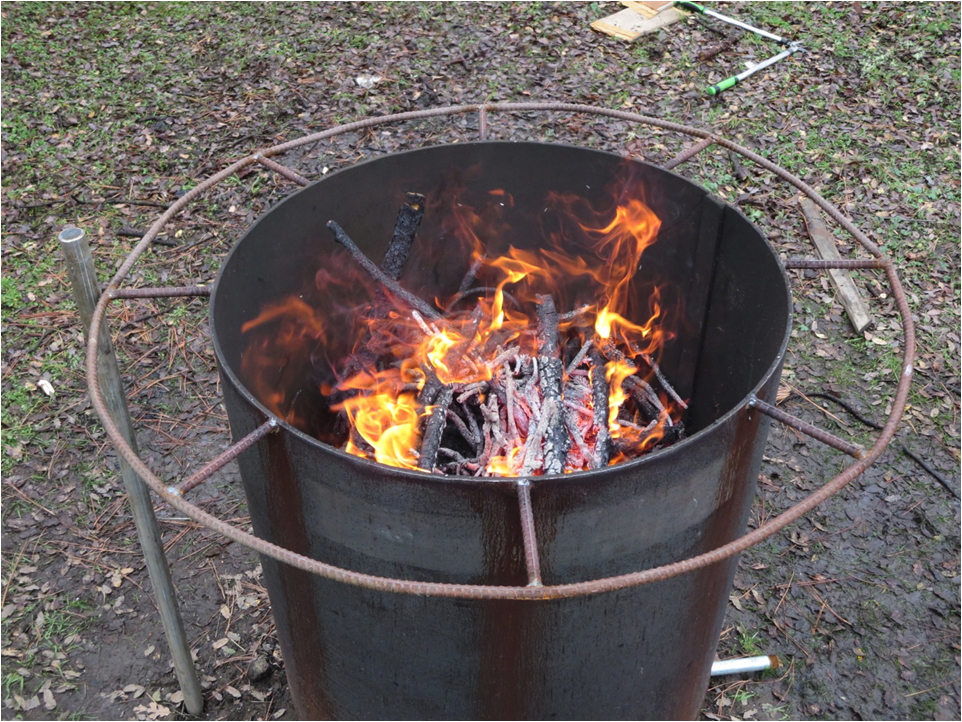 The surround handle aids in tipping the heavy kiln over

The biochar next morning 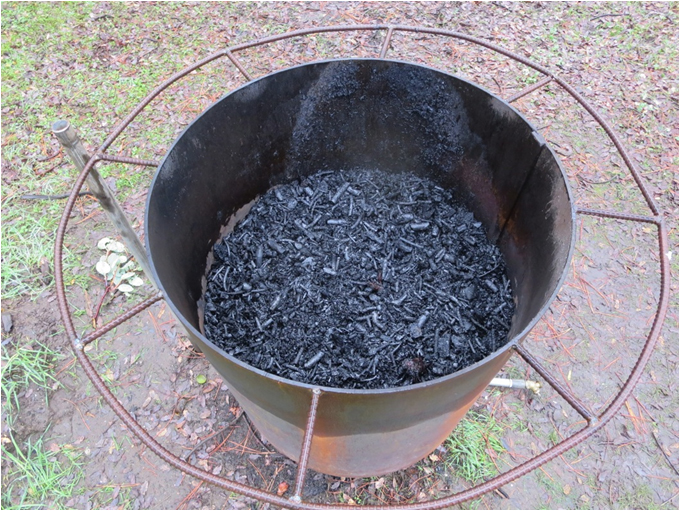