To evaluate the performance of a pit of similar shape to a cone kiln, a pit was dug on slightly sloping ground nearby the Cone Kiln, which was firing simultaneously. See previous Post 1, Post 2 and Post 3 for a run down on the kiln we are comparing with.

Our pit profile was 140 cm diameter at the top, 70 cm deep at mid pit from the ground profile. Assumed to be a truncated cone of these dimensions, the kiln volume is 580 L. The pit edge was lined with stones to even out the rim profile towards the horizontal.

A 75 x 85 cm grate was installed 25 cm above the bottom, so 45 cm below the mid kiln ground profile. The grate was 7 mm bar concrete reinforcing mesh on 150 mm centers. The purpose of the grate was to place the base of the fire less deep into the kiln for easier starting; to keep it off the cold, moist earth; and to provide a volume (100 L) for the char to settle into and be preserved.

A double layer of sticks was laid over the grate before building a tall pyramid of sticks on that base, to light the fire at the top so that it had access to ample air circulation. While we experimented with grates, they are not necessary and can be avoided by stacking up a grid of wood or ball of bush so that a good fire can be started at the top. If a grate is desired it needs to be thicker for heat strength. (see Post 3) 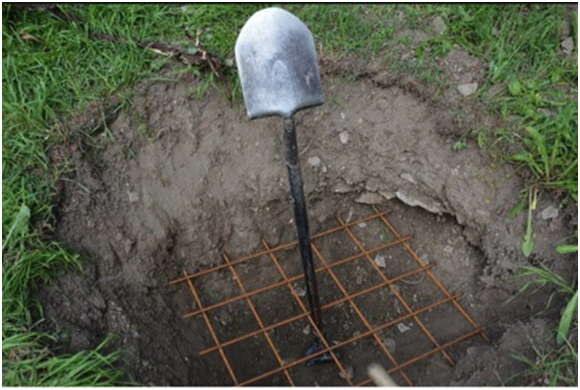 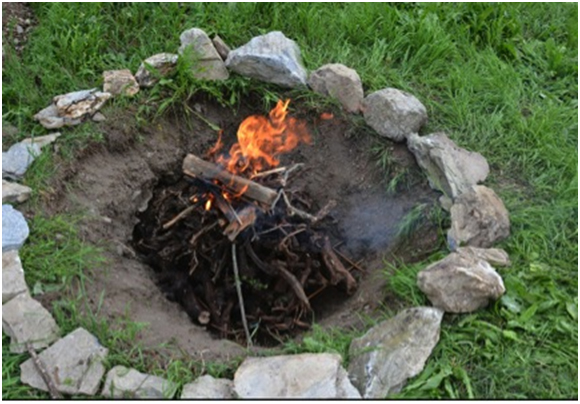 It seemed likely that the fire was slower to start due to ground soaking up rather than reflecting heat as in the cone kiln, but later in the burn the dried ground was holding heat and leading to hotter burn.

Once the fire was spread another layer of sticks was added, and this process continued whenever white ash appeared on the previous layer (this takes just a few minutes). It was soon apparent that char settled through the grate, and continued to support flame in the space below the grate, indicating air could convect into that space. However, as the lower space filled and char accumulated above the grate, the char below was preserved.

The expectation was that cold air would draft horizontally across the ground into the updraft above the kiln. Upon crossing the rim of the pit it would tend to entrain air up the wall of the kiln thus initiating a convection loop in the kiln. This was expected to be less robust and more chaotic at the rocky edge of the pit kiln than at the sharp and even edge of the cone kiln, where the air is preheated and rising vertically at higher speed. The inwardly rolling convection loop at the rim was observed but less stable and smaller than in the cone kiln, so that down draft at the center was less apparent and there was more flame in the center of the kiln.

However operation of the kiln was very satisfactory, with apparent hot clean combustion and good preservation of char.

The kiln produced more copious steam when quenching than did the metal cone kiln indicating a higher temperature and/or more heat capacity within the earth insulated char body. In fact the metal cone kiln was touchable by hand in the lower region before quenching due to radiation and convection of heat away from the lower metal wall. Naturally all water drained away in the earth, leaving a char level in the kiln about 20 cm below the soil profile indicating a char volume of 400 L.